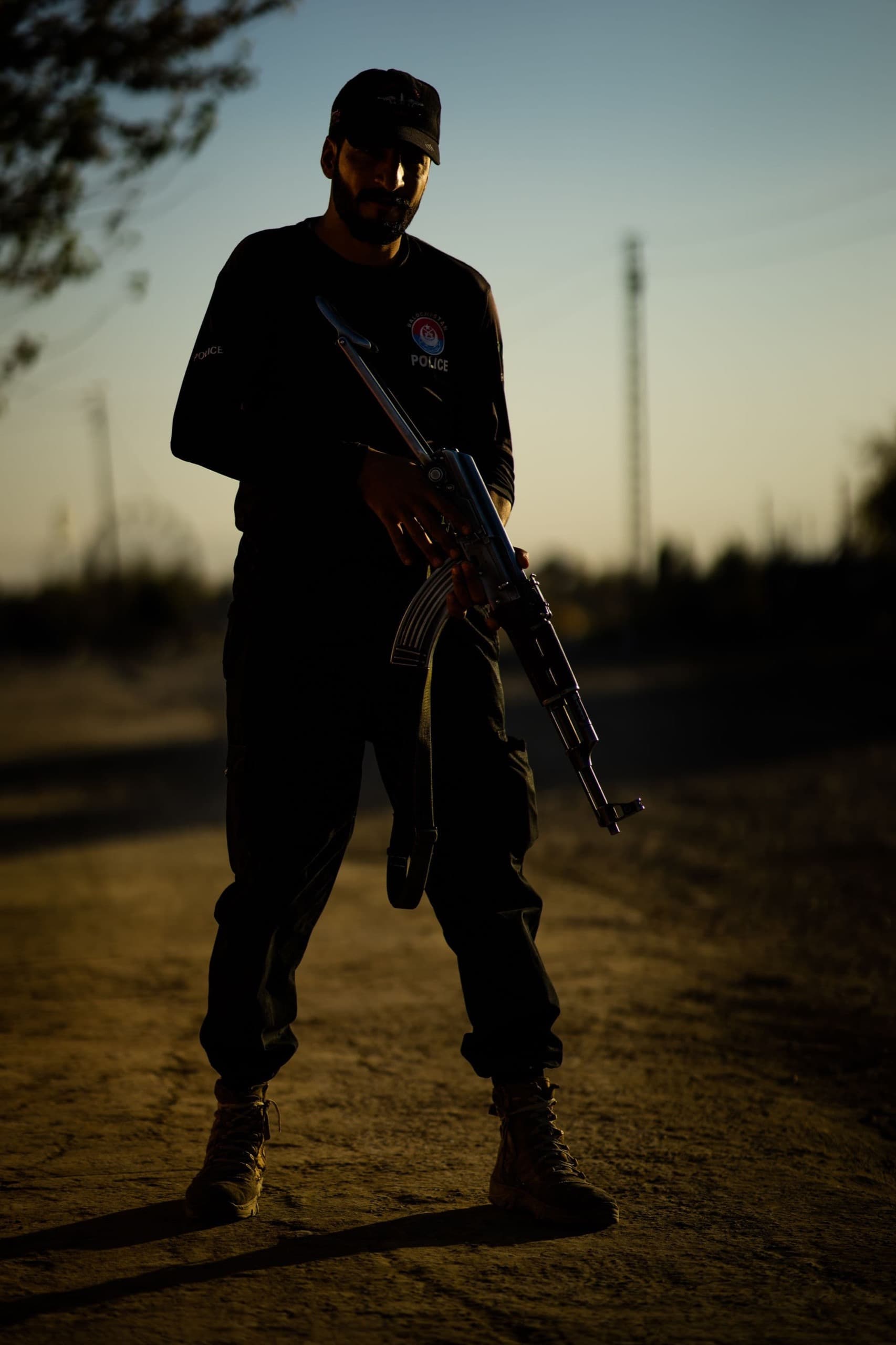 In my time in Pakistan I mostly spend my days in police barracks, army bases, military escorts with commandos and being interrogated and threatened by their Intelligence agency  the Inter-Services Intelligence (ISI). The high police activity has its historical reasons, due to conflicts with India and terrorism activity in the country . As a result, you'll find police throughout the country. During the 2020 Gilgit-Baltistan elections, 10.000 mostly Punjabi police officers flooded the disputed mountainous region. In the Chinese economic enclave of Gwadar, a port is secured by an enormous amount of security as well - no foreigner or even local Pakistani gets in or out. One can argue that the army has too much power and is actually the ruling party, but who knows?

Here's an exclusive photo series on the police state of the Islamic republic of Pakistan, of life in the barracks and in the field. It shows how they get dressed, cook food, their toxic masculinity with guns and logos, where they socialise, eat, and sleep, as well as how homophobic officers grab their comrades by the crotch reminding us that these are simply people (some of them very friendly), doing their job. But then again, I happened to be a foreigner and not a local.

The raw masculinity can be felt in all the guys

They are proud of their guns, their AK-47's, or the Chinese Type-56 copy as well as the locally mades ones. The ones from Darra Adam Khel would be sold to whoever paid them. Some of the officers mentioned that theirs was from that village.

Yet some officers were more occupied in looking masculine than protecting the areas.

Nonetheless, it provided the opportunity to take great photos

A fighters most priced possessions: His weapon and his smartphone

Well-styled and ready to go they are the perfect macho-man in the desert. During discussions with the fighters, they weren't very tolerant of LGBT - yet somehow it was a sport to grab each other by the crotch. I am undecided if this is a good or a bad thing and have simply resorted to posting photos of this behaviour.

These two pictures were two separate incidents on the same car ride.

This car was part of a 2-police car escort with veterans that escorted me towards Islamabad from Dera Ismail Khan on a 9-hour ride.

At any given moment there was an officer hanging out of the window to check for incoming danger.

The ~12 officers has no choice but to obey and follow and do as they told.

Sometimes its not only Pakistani's who pose for the photo.

Life at the barracks

In the previous section an overview of the 'Rambo-Commando subculture' of the Pakistani police was shown, yet the normal life of the guys stationed at the barracks is equally interesting

An interesting start is the uniforms of the guys. From a Pakistani militarised police force, one could expect Pakistani uniforms. Yet reality is usually different from expectation

They appear to be hand-me-downs from other countreis. This one has Korean writing on it

This uniform proved to be a reminder of my own country, The Netherlands. Where exactly it came from was unknown.

The following photos show the living conditions of these men.

The beds where they (and I as well) sleep

Frequently they rest with their weapons at their side

Or the weapons itself are resting without anyone guarding them.

Valuables are stored in these large boxes

Or, on top of them. It doesn't seem to matter to them.

As long as the weapons look cool, its all that matters to many.

A kitchen stove wasn't used for cooking - it was used as a heating system, burning cheap Baluchistan gas.

Food came from the community kitchen, made by this young man (among others)

While basic, it provided a tasty way to regain lost calories.

Clothes and shoes hang to dry

The police sleep with their under-layers on, and jump into uniform as soon as the higher commander enter. Their pyjamas are simply the traditional outfit worn in Pakistan named Shalwar kameez.

While strict uniforms are mandated, the officers take certain 'liberties'.

Because the security system used to control the base, but also the officers is relatively ancient and doesn't show details like a 'fresh' hat.

Cricket is also the most popular sport in Pakistan and is frequently watched during work hours.

The TV is not the only thing that is old in the barracks. While the high ranking officers gather around and drink alcohol, the common police has to make due with a calendar from 2007. But quite possibly time isn't such a priority in Pakistan.

Time is indeed rarely an issue for Pakistani's. Not for the officers nor for the people inside the prison whose motorcycles have been confiscated. Speaking of prisoners, I ended up in a police station in Hub, Baluchistan where I could take some illegal snapshots of life inside the prison and witnessed a trial.

This chained young man was awaiting his trial, it reminded me of a monkey being held and the man didn't look too happy about it.

I was allowed to try on the handcuffs while joking around with the officers. They really are not comfortable to wear and look rather medieval.

Inside a trial of four alleged bank robbers who apparently fired shots at people and escaped on motorcycles. I wasn't sure why, but I was present while they were introduced to the head of police and made their case to him. What followed were loud pleads for mercy which included them kneeling down to the floor.

The result of a trail. "In Pakistan we first smash, then we ask questions", an officer jokingly told me. After questioning this is where the people end up. Without 1.5m distance nor a face mask. But it seems like a pandemic was the least of their concerns.

I assumed that one of their bigger concerns was getting them as well as their vehicles out of there.

These are some of the confiscated vehicles stationed in the police station. They were taken from alleged criminals and "would be returned quickly", an officer said.

Judging by the amount of dust laid on the bikes, time was indeed a foreign concept in Pakistan.

When I traveled through the country I encountered a large amount of government propaganda a cross the country. They reflected whatever political theme was important at that moment.

The following few images reflect the Pakistani goverments sentiment of the Kashmiri conflict with India. Some were found on the streets, others in army bases.

"Kashmiris are humans without HUMAN RIGHTS"

While I hitchhiked North into the mountainous Azad Kashmir and Gilgit-Baltistan, the rocks were scattered with messages relating their feud with Israel.

"Palestine will be free"

Furthermore, at the numerous political rallies, the flags and logos of the ruling party could be seen as far as the eye could reach.